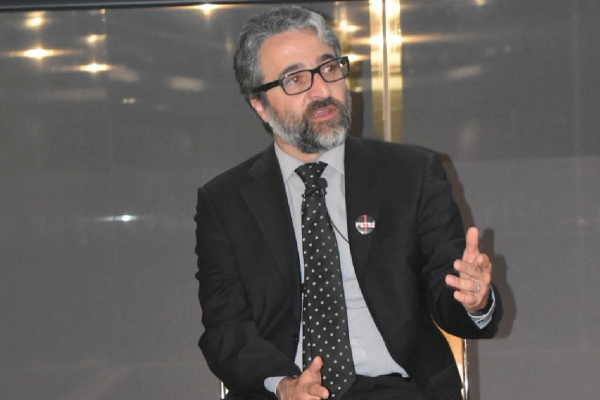 Dr. Hamed Esmaeilion, the Iranian-Canadian Novelist, gave a book talk on November 3rd, 2022, talking about his life and his recently published work, It Snows in This House.

Hamed Esmaeilion, the Iranian-Canadian novelist, studied dentistry in Iran. In 2001 he married Parisa, his classmate. They immigrated to Canada in 2010 with their daughter Reera. Dr. Esmaeilion started his career as a writer 30 years ago and won a number of prizes for his novels and short story collections. Hamed lost his wife and daughter on flight PS752 that was shot down by IRGC missiles over the skies of Tehran on January 8, 2020. After being black-listed by the Islamic Culture and Guidance Ministry, Hamed published his next novel The Blue Toukan (2018) by Nashre-e Mehri in the United Kingdom. He recently published his memories with his wife and daughter in a book titled It Snows in This House. He also completed and published two novels “The Fractured Diaries of the Chancellor” and “The Summer with Five Bullets”.